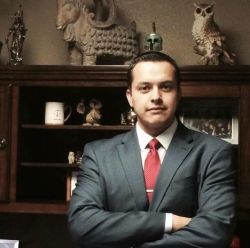 Attorney Ricardo De Lara, Jr. was born and raised in El Paso, Texas. He completed a double major at the University of Texas at El Paso, obtaining bachelor’s degrees in Political Science and Criminal Justice, and obtained his Juris Doctor degree at Texas Southern University’s Thurgood Marshall School of Law in Houston, Texas. He has been licensed in and by the State Bar of Texas since 2012.